The heaviest class of combat robot in the United States Armed Forces, the sentry bot's singular purpose is to provide security through overwhelming firepower.[1] The sentry bot had become a standard piece of military equipment by at least 2063, with prototypes existing further back.[2] The assaultron is designed for melee combat, and the Mister Gutsy is a jack-of-all-trades. The sentry bot's purpose is to engage the enemy at range with a variety of weapons, including miniguns, Gatling lasers, rocket launchers, and even back-mounted cluster grenade launchers. At the same time, its thick armor and multiple redundant systems allow it to survive extended engagements. It's commonly considered to be one of the most dangerous robots ever created and RobCo Industries' finest fighting robot. Late models are also provided with the ability to self-destruct to prevent the enemy from recovering the robot.[3] Early sentry bot models were issued serial numbers in the SB-#### format (model, then serial), with later models transitioning to the standardized alphanumeric registration in the ABC-###### format.[4]

Sentry bots are the highest-level robots in Fallout 3; they are extremely durable, possessing as much health as a deathclaw but lack a weak point that could be targeted for additional damage. In fact, their heads are more durable than their torsos, though targeting the head yields a greater chance of a Critical Hit. Like other robots, sentry bots are equipped with a combat inhibitor, and will frenzy if the inhibitor is disabled. Exploiting this weakness can be helpful in dispatching other enemies, since sentry bots are among the most powerful foes in the game. Although they are quite fast, they have a slow turning rate, which can be used to the player's advantage.

This unique sentry bot is encountered in Broken Steel at the end of the Presidential metro, near the metro to the Adams Air Force Base. It holds the main fuse, which is needed to repair the nearby powerbox for the metro. 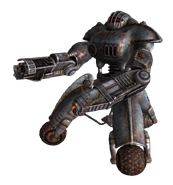 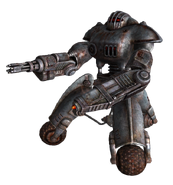 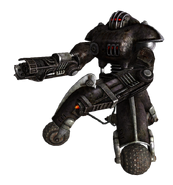 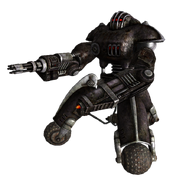 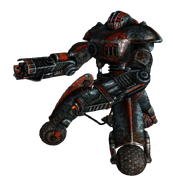 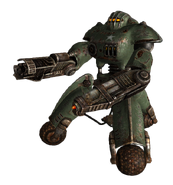 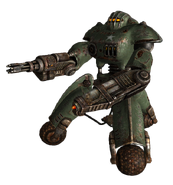 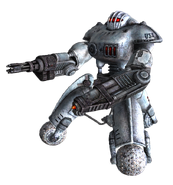 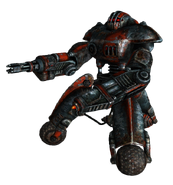 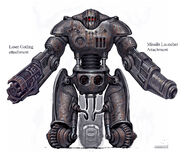 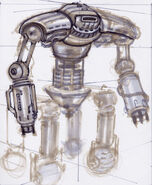 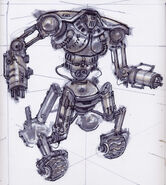 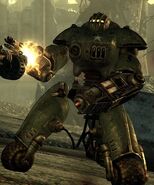 Outcast sentry bot in the field
Add a photo to this gallery
Retrieved from "https://fallout.fandom.com/wiki/Sentry_bot_(Fallout_3)?oldid=2144578"
Community content is available under CC-BY-SA unless otherwise noted.
FandomShop Newsletter Join Fan Lab