“Warning: use of lethal force is authorized!”

Sentry bots are the highest-level robots in Fallout 3; they are extremely durable, possessing as much health as a deathclaw but lack a weak point that could be targeted for additional damage. In fact, their heads are more durable than their torsos, though targeting the head yields a greater chance of a Critical Hit. Like other robots, sentry bots are equipped with a combat inhibitor and will frenzy if the inhibitor is disabled. Exploiting this weakness can be helpful in dispatching other enemies, since sentry bots are among the most powerful foes in the game. Although they are quite fast, they have a slow turning rate, which can be used to the player's advantage. 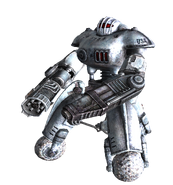 Cite error: <ref> tags exist, but no <references/> tag was found
Retrieved from "https://fallout.fandom.com/wiki/Sentry_bot_(Fallout_3)?oldid=2909137"
Community content is available under CC-BY-SA unless otherwise noted.