Sentry bots are robots found in the Mojave Wasteland, Big MT and the Divide in 2281.

This section is transcluded from sentry bot. To change it, please edit the transcluded page.

Its successor (manufactured only in limited amounts) is the bipedal Mark II sentry bot.

Sentry bots found in the Mojave have two arms that end with deadly weapons (a minigun or Gatling laser on the right arm, and a missile launcher on the left arm), and tripod legs with wheels. They also have armored heads and, as such, receive less damage from head shots. They are programmed with an authoritative, professional military personality, in contrast to the "gung-ho," patriotic personality of the Mister Gutsy models.

Because of their high health and destructive weapons, sentry bots are formidable combatants and can be difficult to put down, especially fighting them at a low level. Like all robots, sentry bots have a combat inhibitor on the back of their chassis that, when destroyed, will cause the sentry bot to go berserk and attack everything near it. Being a robot, sentry bots have no defense against electromagnetic pulses (EMP), so they can be heavily damaged by pulse grenades, pulse mines, or any other weapon that produces an EMP. The sentry bot's use of their weapons systems depends on the distance to the target. If the target is at a long range, it will rely on the missile launcher to damage the target while also using their secondary weapon (Gatling Laser or minigun attachment). However, once the target reaches mid to close range, sentry bots rely primarily on their minigun/Gatling laser attachments instead of their missile launchers to avoid splash damage.

Sentry bots are armed with an arm-mounted minigun or Gatling laser on the right arm, and a missile launcher on the left arm. They have thick armor plating, and are agile in combat. Although not as common as in Fallout 3, they can still be found in various parts of the Mojave Wasteland that contain robotic guardians, such as the sacrificial chamber in Vault 11 (depending on the Courier's level) or the securitron vault.

This particular type of sentry bot can only be encountered at REPCONN headquarters, with twelve of them hidden within the building. They have the same paint scheme as standard sentry bots, but with "REPCONN" emblazoned in white across their chest. They are also much shorter in height and have glowing green eyes instead of red. If the player trips the alarm system, these bots will emerge from the hidden rooms inside the building.

A hardened sentry bot is a tougher version of the military sentry bot. They are encountered along with hardened Mister Gutsies around the crashed vertibird in the Mojave Wasteland. Hardened sentry bots have nearly twice as much health as a standard sentry bot (500 hit points as opposed to 300 hit points). However (possibly due to a developer oversight), despite what the name might suggest, they are completely unarmored with a DT of 0, unlike a standard sentry bot which has an innate DT of 18, and thus can actually survive less damage than a standard model sentry bot. One result of their increased raw health is a greater resistance to pulse grenades. This conforms with the actual electrotechnical definition of the term "hardened," meaning that hardened electronics are much more resistant to electromagnetic pulses.

It is similar to the military sentry bot in appearance, but is differently colored, with orange eyes instead of the standard red. The NCR sentry bot was originally intended to be stationed in Camp McCarran, evident in its G.E.C.K. id McCarranFieldSentryBot, but was cut from the final version of Fallout: New Vegas.

Appears in the Fallout: New Vegas add-on Lonesome Road, some with aesthetic differences.

If a sentry bot is firing for an extended amount of time, the sound may glitch and keep repeating (frequently the Gatling laser variant). [verified] 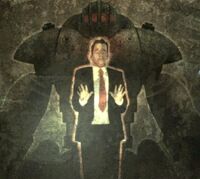 A sentry bot featured in a REPCONN PSA