Sentry bot is a robot that appears in Fallout 2, Fallout 3, Fallout: New Vegas, Fallout 4 and Fallout 76.

An antique prototype of RobCo's sentry bot line that didn't enter mass production. This prototype model features four legs on articulated mounts, with two sets of three jets mounted where the arms would be present in the production model. Hardpoints are present on the arms, which are attached on the back and flank the head assembly. The weapons themselves are a pair of 5mm miniguns in a Gatling laser mount.[4]

An early sentry bot model also referred to as a security robot. Walking on two legs and clad in heavy armor, it carries a pair of weapons: A minigun on the left and a specially-designed multiple missile launcher on its right arm. Vision is provided by the head unit, with a single, central red eye. This old design has been largely retired by the Great War, as its height - well over two meters - and instability resulting from its center of gravity and two legs limited its performance in the field. It's a rare sight in the wasteland, with the only known facilities to use this elderly model being the Sierra Army Depot and the Enclave Oil Rig.

An early sentry bot model developed by RobCo Industries, designed specifically for heavy combat. The bot is divided into two halves. The upper body contains the central processing unit, power core, and mounts the primary optical receptor. The bot is protected by a cast armored shell, consisting of just three pieces: The torso and upper assembly, a separate rear plate giving access to internal mechanics, and the head assembly protecting the main optical receptor. Its arms act as hardpoints, accepting a variety of weapons including miniguns, Gatling lasers, and rocket launchers. The lower body is connected by four shock absorbers and a centrally-mounted duct. It contains fans venting accumulated hot air outside the chassis, preventing overheating. For movement, the lower body is fitted with three independent legs that provide it with a stable firing platform in any environment, much like a machine gun mount. The legs terminate in semi-spherical wheels (rubberized on the front and solid steel scoops on the back), giving it excellent mobility as well.[5][6] Unlike the Gutsy or Assaultron, all sentry bots come with a simple synthetic personality.[7]

The ultimate in high-end robotic engineering,[8] the next-generation sentry bot is the heaviest and most powerful pre-War military robot design that reached operational status. It contains two distinct assemblies. The upper body, protected by a rounded, cast armored shell, contains the primary systems of the sentry bot together with the fusion core sockets. A pair of large fans help cool down the torso assembly, while hinged flaps over the fusion cores allow for emergency venting if heat buildup reaches critical levels (its only major vulnerability).[9] The head is mounted at the front, on an articulated mount that offers a degree of mobility, and typically protected by an additional level of armor. The arms act as hardpoints, accepting a variety of loadouts including a tri-barrel minigun and a triple-shot missile launcher. An additional hardpoint is installed on the back of the sentry bot, allowing for a pair of cluster grenade launchers.[10]

The lower body retains the original's wheeled chassis, with three legs terminating in wheels providing a stable firing platform in almost any terrain. Hydraulic actuators allow the sentry bot precise control over its position and placement, a major improvement from the previous models. The greatest mobility improvement in this model is the introduction of Mecanum wheels. These allow it to move in any direction in combat, without having to break the line of sight to relocate.[11]

Slightly darker in appearance when compared to the normal variant, the Enclave model boasts improved systems. They appear at Raven Rock and alongside Enclave squads in the wasteland. During Broken Steel they are encountered guarding Adams Air Force Base.

Military robots from before the Great War painted in the characteristic olive green of the U.S. Army. They can be encountered at Fort Constantine, the National Guard depot and when wandering around the wasteland.

The most expensive option for recruitment in Operation Anchorage is a winterized sentry bot, with a built-in minigun and missile launcher, costing 4 recruitment markers.

This unique sentry bot is encountered in Broken Steel, at the end of the Presidential metro, near the metro to Adams Air Force Base. It holds the main fuse, which is needed to repair the nearby powerbox for the metro.

A hardened sentry bot is a hardened version of the military sentry bot. They are Enclave affiliated, encountered along with hardened Mister Gutsies around the crashed vertibird in the Mojave Wasteland.

It is similar to the military sentry bot in appearance but is differently colored, with orange eyes instead of the standard red. The NCR sentry bot was originally intended to be stationed in Camp McCarran, evident in its G.E.C.K. id McCarranFieldSentryBot, but was cut from the final version of Fallout: New Vegas.

A siege breaker sentry bot is a slightly upgraded version of the normal sentry bot, only appearing in Fallout 4. They can be dangerous opponents for lower level players. 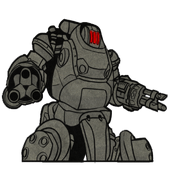 A sentry bot, as shown in the unimplemented Heavy Duty perk card 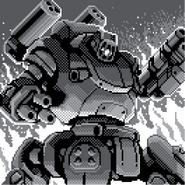 A military sentry bot, as seen in Wastelad
Add an image to this gallery

Retrieved from "https://fallout.fandom.com/wiki/Sentry_bot?oldid=3283253"
Community content is available under CC-BY-SA unless otherwise noted.