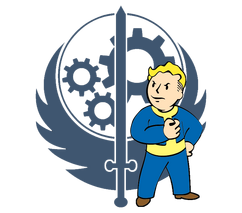 Semper Invicta is a Brotherhood of Steel main quest and achievement in Fallout 4.

Once the Survivor completes the quest Call to Arms, this one will show up automatically, asking the player character to go back to Cambridge police station and talk with Danse.

After the discussion, Danse asks the Sole Survivor to help both Rhys and Haylen doing their respective job.

Once the job is done, the quest The Lost Patrol will begin.

Semper invicta is Latin for "always invincible.". It is also the motto for the city of Warsaw, Poland since World War II, a testament to the strength of the city.

Retrieved from "https://fallout.fandom.com/wiki/Semper_Invicta?oldid=2603130"
Community content is available under CC-BY-SA unless otherwise noted.