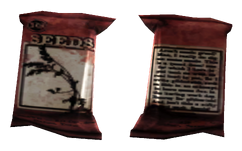 A seed package is a world object in the Fallout: New Vegas add-on Old World Blues.

The dried seeds are in three separate packs and can be collected in any order during the quest Field Research. The seed packages are activators and aren't added as seeds to the player's inventory. Instead, they are converted into dried versions of 11 miscellaneous items in total when activated.

Retrieved from "https://fallout.fandom.com/wiki/Seed_package?oldid=3189863"
Community content is available under CC-BY-SA unless otherwise noted.