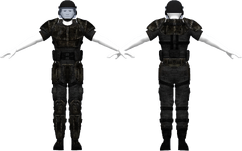 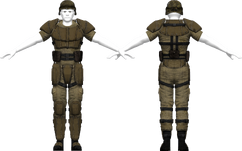 The black-colored Rivet City security uniform and helmet are worn by the Rivet City security guards at Rivet City. Visually, the uniform appears to be scratched and worn. It also seems to have a very faint camouflage pattern if looked at closely, which is more visible on the female version of the armor. The helmet comprises a black combat helmet and an acrylic face shield identical in appearance to the Vault 101 security helmet with two main differences, it has a higher damage resistance and can be equipped with eyewear like sunglasses.