“We are reading increased levels of berserkity in Securitrons from the De-Construction Plant.”— Doctor 0, over the intercom

The securitron de-construction plant is a location in the northeastern part of Big MT.

There are picnic tables and radioactive barrels just outside the east entrance to the building, surrounded by a torn chain-link fence. On the west side of the building, several letters from the sign have fallen on the ground.

Inside the building from the east entrance, several securitrons patrol an upper platform, including a unique securitron named 010011110110111001100101 (which translates into the word "One"). The upper platform leads to a central upper office area with multiple fission batteries on a long desk. Two doors lead to the main deconstruction area. One of these doors leads to the upper office overseeing the deconstruction area. The upper office has a skeleton sitting at a desk. 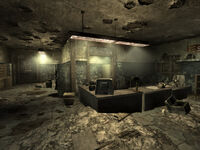 Reception area
Add an image to this gallery
Retrieved from "https://fallout.fandom.com/wiki/Securitron_de-construction_plant?oldid=2799461"
Community content is available under CC-BY-SA unless otherwise noted.