“Please, do not stand in the fountains.”

The PDQ-88b securitron (also named the RobCo security model 2060-B) is a private security robot created and mass-produced by House Industries with the help of RobCo Industries, and privately and on a much smaller scale by the Big MT research company, who were primarily attempting to improve the original. They are commonly found on The Strip, patrolling. Other locations include Big MT and around Lucky 38.

The PDQ-88b securitron is a large, monowheel robot with a titanium alloy housing, resistant to shrapnel and small arms fire. The PDQ-88b securitron is heavily-armed. Its left arm contains a Glastinghouse X-25 Gatling laser for medium range engagements. For close-range suppression and crowd control, the securitron mounts a 9mm machinegun in its right arm. However, these are only secondary weapons; concealed compartments in its shoulders contain M-235 missile launchers for long range and surface-to-air engagements, and a rapid-fire G-28 grenade launching system for close range engagements. The robots also have onboard auto-repair systems to repair any damage sustained from combat. Thus armed, a securitron can handle nearly any combat situation.

The PDQ-88b securitron produced by House Industries supports only two operating systems: Mk I and Mk II. The Mk I operating system lacks drivers for the auto-repair systems and explosive weapons, limiting the robot's arsenal to the built-in X-25 Gatling laser and the 9mm machinegun. The Mk II operating system enables the M-235 missile launchers, the rapid-fire G-28 grenade launching system, and the auto-repair system. As estimated by Mr. House and Yes Man, the upgrade improves the combat effectiveness of each securitron unit by 235%.

These are the models created by House Industries, the original creator of the PDQ-88b securitron, with the help of RobCo Industries. After the Great War, they are almost all controlled by Mr. House, and can be upgraded via the platinum chip.

The securitron Mk I can only use the X-25 Gatling laser and the 9mm submachine gun, but it can not use its auto-repair systems. The unit's face is that of an American policeman.

* The securitron Mk I's on The Strip have a DT of 0. The securitrons in Freeside and inside the Lucky 38 have the normal DT of 20.
* Mark 1s have grenade launchers instead of X-25s, and will use it frequently despite them supposedly not having the software drivers for them.

Through the use of the platinum chip, the Courier may upgrade the securitrons of Mr. House or Yes Man at The Fort and around The Strip to the Mark II operating system. The Securitron Mk II can use all the build-in weapons: the 9mm submachine gun, the rapid-fire G-28 25mm grenade launcher, the M-235 missile launchers, and the X-25 Gatling laser system. However, outside of the Lucky 38 basement demonstration, it only ever uses the last 3. It can also use the auto-repair systems, and its armor is increased. The unit's face is that of an American Army infantryman.

They are a new line of securitrons created in Big MT by Doctor 0 and his team to surpass the PDQ-88b securitron created by House Industries and Robert House (the latter considered by 0 to be his greatest enemy). These efforts succeeded to a degree, as a Mk VI securitron operating system was developed. However, these never reached full production, and as of 2281, all of Big MT securitrons are either irreparably damaged or have gone berserk due to lack of maintenance for over 200 years, also now lacking any functional armor.

The unit's face of the berserk PDQ-88b securitron is a distorted face, similar to the "angry moon" featured in the film A Trip to the Moon. The berserk model has the ability to use the rocket launchers in its shoulders and the laser in its arm, but not the grenade launcher or machine gun.

The unit's face of the damaged PDQ-88b securitron is the berserk one's face crossed out. It can use the grenade launcher and machine gun, but not the other weapons.

Securitrons in the Mojave Wasteland are the hands, eyes and soldiers of Mr. House. Notably, they patrol the Strip and guard its north entrance. Like all robots, securitrons cannot be pick-pocketed, and attempting to do so will just trigger the securitron to say one of their quotes. The Courier may upgrade the units to the Mark II operating system through the use of the platinum chip.

Those of Big MT, however, are all hostile to the Courier, with the exception of Muggy. 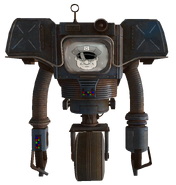 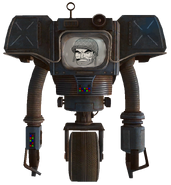 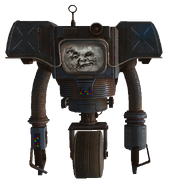 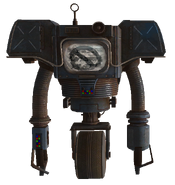 Monitor as seen on the berserk securitron

PDQ-88b securitron Mk I in the opening scene of Fallout: New Vegas 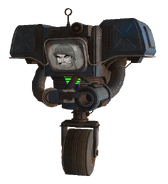 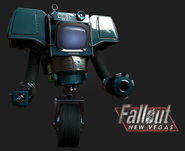 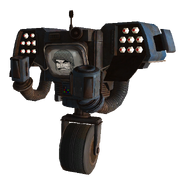 Securitron trying to remove the graffiti
Add an image to this gallery
Retrieved from "https://fallout.fandom.com/wiki/Securitron?oldid=2364207"
Community content is available under CC-BY-SA unless otherwise noted.