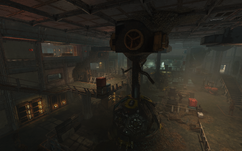 Secrets Revealed is a main quest in the Fallout 76 update Wastelanders .

With the Vault breached and the cutting-edge security broken through, the final step is reaching the gold. However, there's one wrinkle in the plan: A group of surviving Secret Service agents who are trapped and requesting rescue.

Immediately past the secure door in the barracks is a Vault window, behind which stand are Slick and AC, along with other surviving members of the Secret Service. After a brief interrogation as to the reasons for being in the Vault, they'll enlist the Foundation's help in breaking free out of the death trap that Vault 79 became, trading gold for freedom. Using emergency power, AC will open the doors to the reactor, so that the team can reactivate it and power up the Vault's systems to release the Secret Service from its trap.

Heading north through the recently-opened door will bring the team into contact with Digger, who was ghoulified in the reactor malfunction that damaged the Vault's system and turned most of the reactor crew into ferals. Chase was one of the lucky ones - the luckiest, since he's the only one still alive. He'll explain that the only way to restart the reactor is to vent the radioactive air from the room, which will also eliminate the ferals (and point out that he didn't do it himself, because any more radiation might cause his mind to melt too).

The entrance to the reactor control room is in the northwestern corner of the chamber, up the stairs. A Master-locked terminal on the left wall from the left-hand entranceway can be hacked to provide a shortcut to the control room. Once inside, hitting the ventilation override button will cause the room to be vented, killing ghouls inside. Once the process completes, robot security will appear (turrets can be disabled or hacked using the level 3 security terminal in the control room). After the reactor room has been cleared, the team has to find to the gold processing room (directly west from the reactor chamber).

Inside is a total of 1000 gold bullion. Allies present will remark on the suspiciously low amount of gold compared to the whole size of the reserve and agree that the main vaults are still locked down. After all the bullion is collected, on the raider side if Johnny survived the previous quest, he will attempt to betray the Vault Dweller; he must either be killed, or he can be convinced to stand down using a Charisma 4+ check.

Either way, upon collecting all the gold, including the supply from the military trunk, the team simply has to leave and return to Digger, then follow him to the rest of the Secret Service. They will be surprised to see him ghoulified. Regs and Mercy will suggest killing Digger, while AC and Slick will balk at the notion. Citing his inexperience with ghouls, AC asks the player's character for input. They can either sentence Digger, suggest that he's probably harmless, or give their word with Charisma 7+. After Digger's fate is decided, AC will offer a deal: Gold bullion for advanced, exclusive technologies the Secret Service has, and explain his plan to re-establish currency, identical to that of the Overseer.

Afterwards, the Secret Service survivors will relocate to the Gold Operations Center of the Vault. Once there, AC will remark on the machines as either Paige or Meg appear to finalize the deal and collect.

Optionally, before talking to Paige or Meg again, the player can talk with their allies, Johnny Weston, or Radcliff and Jen, to gain their perspective on things and learn what they are planning to do. Talking to the faction leader again will conclude the quest.

Note that the bullion reward from the quest will not reward additional bullion above the maximum, if it's collected through seasonal rewards before the quest is completed.

Retrieved from "https://fallout.fandom.com/wiki/Secrets_Revealed?oldid=3425891"
Community content is available under CC-BY-SA unless otherwise noted.