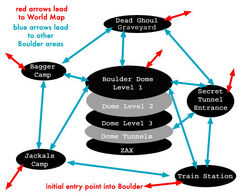 The Secret tunnel entrance is a location that was set to appear in the canceled Fallout 3 by Black Isle Studios, codenamed Van Buren. It is a secret entrance to Boulder Dome.

A secret, non-quarantined tunnel access point into the tunnels under Boulder Dome. Basically, a heavy manhole in the ground in the middle of a blasted open field.

Xian - found half dead in the tunnel.

Retrieved from "https://fallout.fandom.com/wiki/Secret_tunnel_entrance?oldid=3175976"
Community content is available under CC-BY-SA unless otherwise noted.