The Ruins is an area in Vault-Tec's Secret Vault, which is the company's private facility, where its members intended to survive the apocalypse and later enter the world having all the useful technologies possible.

Sometime after the war, the Secret Vault was torn apart by a local civil war between Vault-Tec scientists and Blake, the chief security officer, who believed the researches with FEV and radiation, conducted on living subjects, including humans, are "evil." Their battles led to a major explosion that devastated a large portion of the Vault.

This portion, now known as ruins, become home to a very special variation of deathclaws. These deathclaws are very unique and probably were designed by the Secret Vault's bioweapon research team. Before the explosion, the ruins probably were a laboratory dedicated to the creation of the bioweapons (the possibility is that the unique radbugs of Texas were created here as well) or holding pens for the experimental subjects.

The explosion enabled some species of radroaches and deathclaws, native to the Vault, escape into the wasteland, at the same time allowing radscorpions and rats to invade the Vault.

Mary, a girl from the Garden, goes here sometimes to look for the ring that belonged to her deceased mother. The Initiate of the Brotherhood of Steel comes to this place in order to find Dubois, the missing chief scientist of the Vault, who has the key to the laboratories. The Initiate battled their way through the deathclaws and finally found their main nest in the cave located beneath three levels of the ruins. Here, they battled the "Mama Deathclaw," who ate Dubois, in order to get the key from her belly.

The Secret Vault ruins appear only in Fallout: Brotherhood of Steel. 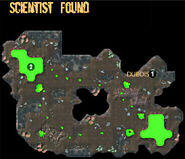 Dubois can be found here
Community content is available under CC-BY-SA unless otherwise noted.
Advertisement