The Laboratories were the most important section of Vault-Tec's Secret Vault, the company's private facility, where its members intended to survive the apocalypse and later enter the world having all the useful technologies possible.

It was the place where all the research of the Vault-Tec scientists took place. It consisted of five levels, including the laboratory core and monorail system available to evacuate scientists out of the Vault to a hidden mountain exit. A high amount of radioactive materials were stationed here for experimentation with living subjects, the most dangerous of which is a special, modified strain of FEV. Also, a terminal that could be used to arm the nuclear bomb beneath the Vault was located here, in case something terrible happened with the research.

The place was soon overrun by super mutants, who stormed the Vault Laboratory and started battling with the security systems and local mutated radbugs and deathclaws. One special deathclaw was located in a holding pen and was probably a subject of FEV experiments. Despite its relatively young age, the Deathclaw grew to enormous size.

The FEV in the Secret Vault was a special version of the virus designed to achieve all of the original goals but also repair the main problem - the sterility. This strain of FEV was the reason why Attis, the general of the Mutant Army, led his forces there. He soon gained access to the laboratory core and used the FEV on himself. However, the scientists had never succeeded in making the FEV work, and instead of repairing infertility, the virus would lead an organism to constantly regenerate and enlarge itself.

Attis rapidly transformed into his new form, covering all the surrounding areas and growing with each passing second. The need arose to use the nuclear bomb to kill him and destroy the Vault. Patty, the security officer from the Garden, now trapped inside Attis' flesh, helped the Initiate to find the terminal and the monorail system to stop the mutant nightmare and escape from the vault.

The third level of the Vault was protected by a passcode terminal. The correct button combination was found on a ring of one of the scientists - 929.

The Secret Vault Laboratories appear only in Fallout: Brotherhood of Steel. 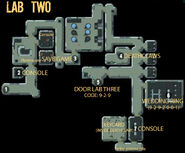 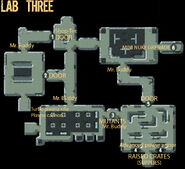 Monorail to the final showdown with Attis
Community content is available under CC-BY-SA unless otherwise noted.
Advertisement