The Facilities is a location inside Vault-Tec's Secret Vault, which is the company's private Vault, where its members intended to survive the apocalypse and later enter the world having all the useful technologies possible. The facilities were the location where the all maintenance work took place. It also serve as the warehouse, the robot station and central computer system for the Vault.

The facilities includes three levels and the Vault's CALIX mainframe. When the Initiate comes to this place, it is infested with malfunctioning, dangerous security robots and lethal laser grids. The Initiate succeeded in entering the mainframe, where he battled several nightkin, stationed there to guard against any tampering, and used the mainframe to shut down auxiliary vent and give the remaining Vault residents still in the Vault's Garden access to an escape route.

The Secret Vault's Facilities appears only in Fallout: Brotherhood of Steel. 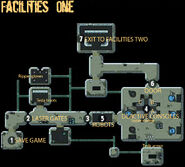 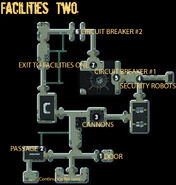 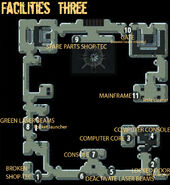