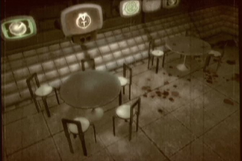 The Secret Vault is one of the vault series of fallout shelters developed by Vault-Tec in northwest Texas underneath the city of Los after the Great War. This vault is located northwest of Carbon.

The Secret Vault is Vault-Tec's private vault, designed as an underground research facility where its high-ranking personnel could survive the Great War and continue to develop scientific, biological and technological advances, behind the back of the Enclave and the vault experiment. The vault serves as a major research and production facility and among its many technological artifacts housed a special version of Forced Evolutionary Virus.

Like many major military contractors, as Vault-Tec grew in finances and responsibility, it began to develop highly experimental and secure technologies. In time, Vault-Tec was so thoroughly integrated with top-secret military research, it was practically a division of the U.S. government. The company still retained some elements of privatization. So the principals of Vault-Tec - executives, scientists, and so on - had to be aware of the true function of the vaults, and they had access to the technology. They were the developers. Regardless of the U.S. government's directives, Vault-Tec was not going to submit to a lottery and live underground with a bunch of human cattle in facilities that were intentionally defective. Thus Vault-Tec created their own facility, removed from the larger vault network - and kept secret from the U.S. government. This facility is now known as the Secret Vault.

Vault-Tec didn't stop there. This secret, private installation was used to research the latest technologies that would benefit mankind in a post-nuclear environment. This included some extensive research with a "forced evolution virus" (FEV) which, unlike the government-controlled research at Vault 87, was kept secret from the government. It is known that the FEV in Secret Vault was highly modified to achieve its original goals, and avoid sterility (though unsuccessfully).

Other Vault-Tec projects that they intended to use for themselves were their own robotic systems, electrical weapons, special biological weapons program (the results are probably the unique radbugs and a variation of deathclaws), medical research on restoring organic tissues damaged or mutated due to radiation, and their own Tesla and power armor model.

The robots were implemented successfully and a special AI called CALIX was developed to control the vault's systems. The Tesla armor and power armor project resulted in the creation of one Tesla version and two power armor versions though they were far less protective than T-51b power armor or Enclave's variants. The scientists experimented with animals and humans, and probably had a prototype of the government's biological weapon - the deathclaw, which was affected by their FEV research and heavily mutated.

The inhabitants of the Secret Vault not only lived in safety but also attempted to study the new world above. There is evidence that they at least captured some brahmin and used them for both food and experimentation. Sometime after the Great War, the Secret Vault was torn apart by a local civil war between Vault-Tec scientists and Blake, the chief security officer, who believed the research with FEV and radiation, conducted on living subjects, including humans, was "evil." Their battles led to a major explosion that devastated the biological center section and enabled some species of radroaches and deathclaws, native to the Secret Vault, escapes into the wasteland, at the same time allowing radscorpions and rats to invade the vault. CALIX also suffered a malfunction and lost control over the majority of the security robots. The people of the vault were divided. While many of them now reside in the garden, other separated groups could be found all around the vault, including the main residence level, where the majority of people still lived. Many died due to monster attacks.

After the defeat of the Master, part of his army remained together, one part under the command of a former Master's commander named Attis. Highly intelligent and vindictive towards the Brotherhood of Steel, Attis took his group into hiding, searching for clues regarding the history of FEV. Learning about a secret Vault-Tec installation with new and possibly improved versions of FEV, Attis led his group to the area where the rumors started, the ghoul city of Los.

In 2208, arriving in Los, he tried to negotiate with the Church of the Lost, the cult that controls the city, but in vain. Sometime later, a contingent of Paladins of the Brotherhood of Steel arrived and a battle broke out between the Attis Army, the Church of the Lost and the Brotherhood of Steel paladins lead by Rhombus. The Attis Army used this confusion to his advantage and managed to get into the Secret Vault, killing the vault dwellers who were in the residence area, but his army remained blocked at this level because they couldn't gain access to other lower level, which required a key card. Later In 2209, the Initiate came into Los, destroyed a weakened Church of the Lost, killed Blake (the high priest of the cult) and came to the Secret Vault to destroy both the Attis army and the Secret Vault with the key card stolen and hidden by Rhombus. The Initiate killed many super mutants of Attis' army and entered the Hub chamber of the residence part, where Attis resided, waiting for the Initiate to come.

Refusing to give him the key card, Attis engaged the Initiate in combat, using his retractable arm blade to fight. When he lost, two nightkins appeared and quickly stunned and captured the Initiate. Taking him to an area with a huge pit down to the ruins, Attis took the key card, cut off the Initiate's arm, and commanded the two nightkin to throw him into the pit. A few moments later, the Initiate encountered Mary in the ruins, who helped and lead them to the garden, where all survivors of the vault now lived. When they arrived, the survivors gave the Initiate a new arm with a restoring organic table.

Later, after multiple chains of events, the Secret Vault was destroyed when the nuclear warhead was activated by the Initiate. With the vault, all of its research and all of the experimental deathclaws, radroaches, super mutants, robots, and the heavily mutated Attis were destroyed. Only a small number of the Secret Vault dwellers managed to survive using the auxiliary vent shaft to escape, which was turned off by the Initiate. The Initiate used the special monorail located in the lab to evacuate quickly to the secret exit in the mountains.

The Secret Vault consisted of five main parts: the laboratories, the facilities, the residence area, the garden and the biological center, which is now in a state of ruin. A nuclear device is located in the mainframe section of the facilities part, in order to destroy the vault as an emergency decontamination procedure if the Secret Vault started to become too dangerous. A special monorail located in the first complex of the laboratories section should be used to evacuate the vault dwellers quickly to a secret exit in the mountains.

The Secret Vault is one of two known facilities to have conducted research on electrical weapons. The other was Big MT, a high-tech military research facility.

The Secret Vault appears only in Fallout: Brotherhood of Steel.

Nuclear device in the mainframe section of the facilities part

Retrieved from "https://fallout.fandom.com/wiki/Secret_Vault?oldid=3461328"
Community content is available under CC-BY-SA unless otherwise noted.