Secret Service armor is an armor set in Fallout 76, introduced in the Wastelanders update.

Along with the Brotherhood recon armor, the Secret Service armor is one of only two non-power armor sets in the game which allows the chest piece to be modified with a jet pack mod. The armor pieces cannot be dropped, sold, or traded, but they can be exchanged for legendary scrip at a legendary exchange machine.

Plans for crafting Secret Service armor can be bought from Reginald Stone. Each armor piece requires a Legendary Module to craft it. The crafted armor will be of legendary quality and can range from one to three stars. Each piece will have a randomized legendary effect and any relevant modifiers assigned to it. Helmet and underarmor can't be legendary.

Paints can be applied to all armor parts except for underarmor. 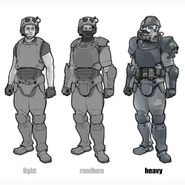