Founded in 1865, shortly after the American Civil War, as part of the federal Treasury Department to combat the widespread counterfeiting of the U.S. Dollar, the Secret Service later became the de facto federal police force alongside the United States Marshals Service until the creation of the Federal Bureau of Investigation.[3]

Shortly before the Great War, the United States government quietly removed the gold bullion from Fort Knox to a new installation in Appalachia, Vault 79. By removing the gold from the well-known Fort Knox, the intent was to assist the re-establishment of government by ensuring that the federal reserve would be hidden from Chinese nuclear strikes and survive for use by members of the United States government. The Secret Service was placed in charge of protecting the vault and its gold reserves, alongside members of the United States Armed Forces, with Derek Garrison acting as the agent in charge.

This division of the Secret Service appears only in the Fallout 76, introduced in the Wastelanders update. 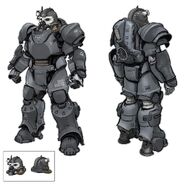