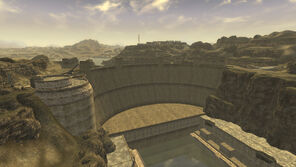 Dependent on the Courier's actions
“Kimball, Caesar, House... you'd think their whole world was that wall, cutting the Colorado. If I'd never laid eyes on it, never spoke of it...”— Ulysses, Lonesome Road

The Second Battle of Hoover Dam is the conjectural name applied to the second offensive mounted by Caesar's Legion against New California Republic forces entrenched on Hoover Dam in 2282, as well as on the surrounding Mojave Wasteland.[1]

After the First Battle of Hoover Dam, Mr. House knew that as soon as either the NCR or the Legion became victorious at the Dam, they would turn their attention to New Vegas. In an attempt to stop this and allow the city remain under his control, he had Victor hire a courier to retrieve his platinum chip, a data storage device capable of upgrading the city's defense systems and activating a massive army of securitrons.[2] This would give House the ability to single-handedly crush the Legion and intimidate the NCR into a retreat.[3] However, the leader of the Chairmen, Benny, learned of this plan and ambushed House's courier outside of Goodsprings, shooting them in the head and leaving them for dead in a shallow grave, taking the platinum chip and throwing House's plans into disarray.

The Courier survived, however, and began a journey to the New Vegas Strip to find Benny and get revenge, in the process of learning the true purpose of the platinum chip and its power. The Courier was faced with the choice of either giving the chip to House or destroying the securitron army or even using it to create an army of their own. The Courier's journey attracted the attention of the NCR and the Legion, both wanting such an influential individual on their side. Also in preparation, the Courier traveled the land looking for other tribes and factions to ally with.

The Courier's role in the battle depended greatly on which faction they sided with. If the Courier sided with House or Yes Man, the battle played out in a similar fashion, both involving the activation of the securitron army. From there, the Courier was forced to fight their way across the dam and into the Legion camp. The NCR questline had the Courier perform the same basic task: fighting through enemy forces to get to the Legion camp on the other side of the dam.

While traversing the dam, any aid the Courier had enlisted would have been acted upon by the corresponding faction. Once the Courier reached the other side of the dam and entered the Legate's camp, they would face off against Legate Lanius. The resulting confrontation would either have had the Courier fight and kill the Legate, or solve the confrontation diplomatically. After dealing with the Legate, the Courier returned to the main gate, at which point General Lee Oliver and his men destroyed it. If siding with the NCR, Oliver would have congratulated the Courier; however, if siding with Yes Man or Mr. House, the Courier would have been forced to confront General Oliver, either fighting and killing Oliver and his men or solving the issue through diplomacy.

If the Courier sided with the polar opposite, the Legion, the battle played out in a similar fashion to the battle involving the Courier siding with the NCR, only it would play out in reverse; the Courier started at the Legate's camp, and then fought their way across the dam to reach the NCR's position, confronting General Oliver. Once again, the Courier was forced to choose between killing the General or convincing him to leave through diplomacy.

The details of the battle at Hoover Dam are unclear, however, the fighting was not just limited to that relatively small location; violence engulfed the entire Mojave Wasteland as Caesar's Legion and its allies attacked NCR targets and locations across the region, with varying levels of success: