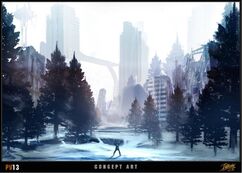 Seattle was a pre-War city in the state of Washington in the Northwest Commonwealth. One of its major landmarks is the Space Needle, which seems to have survived the War. Unlike New California or the Capital Wasteland, Seattle is, at least in the winter, covered in snow.

Seattle appeared in a piece of concept art for Interplay's original Project V13, the canceled Fallout MMO, where the Space Needle is clearly visible. It is not known whether it was intended to actually appear in-game.

Seattle was also to appear in the canceled Fallout Extreme.

The Space Needle appears in the Atomic Command game in Fallout 4. Seattle is mentioned as the setting of the film Manzilloid vs. Roborilla in the Eden Meadows Cinemas terminal entries in the Fallout 4 add-on Far Harbor. Seattle is also mentioned in the holotape Feeling good, looking good in Fallout 76.

Retrieved from "https://fallout.fandom.com/wiki/Seattle?oldid=3233003"
Community content is available under CC-BY-SA unless otherwise noted.