Fallout: New Vegas
“Alright, we can move now. Here's the key to the Fire Station.”— Logan

The station is only accessible by acquiring the Searchlight fire station key from Logan, a prospector found in the storage area of the Searchlight west church. Once acquired, access to the entrance/garage area will result in an attack from a radscorpion queen along with several smaller radscorpions.[Non-canon 1]

On the wall opposite the entrance are two fire axes. The shelving unit next to the axes contains two RadAway and five fire helmets.

The upstairs level consists of four main rooms, including a large room full of beds and duffle bags, a kitchen containing numerous irradiated consumables, a bathroom, and the fire chief's office. The office contains a locked terminal, a RadAway, and another fire helmet. The bathroom is where the unique fire axe Knock-Knock can be found, as well as the last fire helmet. Around the back of the station are two fire trucks with Searchlight fire station logos in an enclosed parking lot.

The Searchlight fire station appears only in Fallout: New Vegas.

The Searchlight fire station is based on the real world location of Clark County Fire Station 75 in Searchlight, Nevada.

View from the west

If it fits, it sits

Fire truck out back 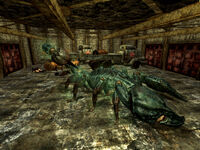 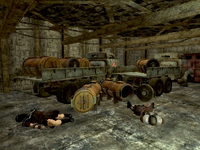