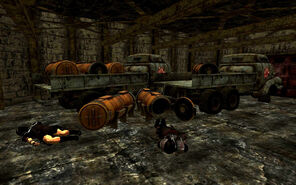 The Searchlight Sabotage was the irradiation of the New California Republic Army's Camp Searchlight by Caesar's Legion Frumentarii in the Mojave Wasteland in 2281.

A convoy of flatbed trucks transporting nuclear waste from the San Onofre Nuclear Generating Station to a burial site was passing through Searchlight when the Great War began. The local police re-directed the drivers to temporarily park their trucks in the town's fire station, two of the trucks parked in the fire station while another continued on its path to Cottonwood Cove. Locked within the fire station, the barrels would sit in their sturdy containers going undisturbed for 200 years.[3][4]

The New California Republic had recently stationed a sizable garrison in the ruins of Searchlight and this was a major obstacle for Caesar's Legion due to its size and view of the surrounding area and proximity to Cottonwood Cove. When it became obvious that a direct assault would not prove fruitful, Vulpes Inculta sent in frumentarii to learn more about the situation. They reported back to him about the pre-War radioactive waste being stored in the town fire station. Knowing that releasing the radioactive waste would render the camp completely radioactive and unusable to the NCR, Vulpes ordered two legionaries on a covert mission to infiltrate the camp's fire station to "open as many containers as possible" and "report back."[5] The legionaries died instantaneously, having only opened two of the containers, their action producing a massive wave of death and ghoulification amongst NCR troops that effectively destroyed Camp Searchlight as a military outpost.[4][6]

The area has become highly radioactive as a result of the opening of the waste containers. This action also resulted in the city having a thick, green haze hanging over it. All troops in Searchlight at the time of the disaster either died or were ghoulified from the massive radiation dose, and most who succumbed to ghoulification went feral within hours. The radiation also attracted radscorpions which have taken the opportunity to nest with the corpses of dead troopers, providing easy food to raise a queen. Not all of the NCR's troops were irradiated by the disaster, however: a handful of troopers led by First Sergeant Astor were on patrol before the containers were opened and were spared death or ghoulification[7] and now warn off passers from entering Searchlight.[8][9]

While not all the troops had succumbed to radiation, there were too few left in the area to pose any serious threat to Caesar's Legion, and thus Caesar ordered Centurion Aurelius of Phoenix to erect a camp at Cottonwood Cove.[10] Even Alice McLafferty of the Crimson Caravan[11] has taken the opportunity to gain from the NCR army's loss by hiring a party of mercenary prospectors to loot the ruins of weapons, computer parts, and other technical equipment from Searchlight.[12]

The Searchlight Sabotage occurred prior to the events of and is mentioned in Fallout: New Vegas.