“I know that this place was originally a mining town before the NCR took it over. I think they mined gold before the war.”— Private Edwards

The Searchlight North Gold Mine is a location in the Mojave Wasteland in 2281. It is found northeast of Camp Searchlight and east of Highway 95.[1]

Progressing past the glowing one, there are other crossroads. The right passageway is blocked and to the left is a glowing one and a dead prospector. The prospector has the key to the Hard locked gate and some ammunition.

The Searchlight North Gold Mine appears only in Fallout: New Vegas. 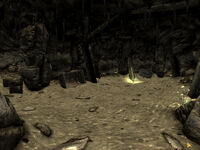 Back of the cave, behind the locked fence gate