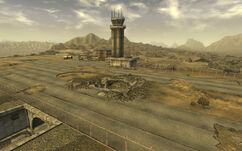 The Searchlight airport is a pre-War airport in the southeastern section of the Mojave Wasteland, directly south of Camp Searchlight in 2281. Its only entrance is a collapsed tunnel on its northern side.

Originally built by the Army Air Corps as an emergency paved runway for pilots stationed at Nellis Air Force Base in the 1950s, the Searchlight airport was eventually handed over to civilian authorities for use as a public airport.

The airport has one runway aligned along the north-south axis and two east-to-west runways, a control tower, and the main building. The airport runs parallel with Highway 95, with a reinforced tunnel that runs beneath the runways.

While there are no accessible buildings, there are two trunks on the west side of the main airport terminal which contain large amounts of caps. Depending on the player character's level and Luck stat, the amount can range from 200 to over 1,000 caps.

The facility is crawling with radscorpions of various sizes. There are several fuel and non-descript holding tanks to the east of the main building, which are not flammable. The control tower has an empty interior and is inaccessible.

There are four jet planes in the area. They are all rusted and two of such have their landing gear stuck in junk piles, but otherwise are intact. Underneath the jet plane at the west end of the runway is an ammo box along with two metal boxes. Sometimes these boxes contain large amounts of energy weapons, ammo, and missiles.[1]

The Searchlight airport appears only in Fallout: New Vegas.

Climbing on top of the oil tanks and over the fence in the upper-left-hand corner of the airport allows for moving beyond the normal constraints of the map. This provides access to areas like the Fort and the Legate's camp before progress in the game would allow for such access.[verified]

Entrance to the airport

Jet plane in the tunnel

Far end of the runway

In front of the main building

Inaccessible interior of the tower

Retrieved from "https://fallout.fandom.com/wiki/Searchlight_Airport?oldid=3497437"
Community content is available under CC-BY-SA unless otherwise noted.