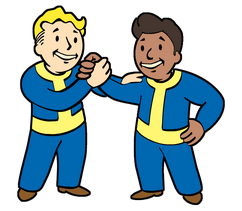 Ally: Search and Destroy is an ally quest for Sofia Daguerre in the Fallout 76 Wastelanders update.

Sofia has found more robot signals. Investigate them and eliminate the source.

Travel to Nicholson's End and kill the Commander Gutsy. Retrieve the algorithm update and return to Sofia. The Mister Gutsy might appear as a friendly, though it will still need to be destroyed.

Emerson Hale will have appeared at the CAMP, to check on Sofia's progress. He will give her another emergence kit to help cope with the headaches, and inquire about the results of tracking down the rest of Daguerre's crew. None could be found - and while Sofia will wonder why they weren't in the escape pod, Emerson will suggest moving on, as it's all "in the past."

When briefed on the Commander Gutsy, he will remark that not many of them were made and that it was an old model in general. When Sofia explains why you tracked it down, he will suggest it's a waste of time and that she has her answers, but also give a clue: Backtracking the Gutsy's program. The quest completes.

Retrieved from "https://fallout.fandom.com/wiki/Search_and_Destroy_(Wastelanders)?oldid=3424745"
Community content is available under CC-BY-SA unless otherwise noted.