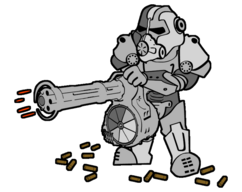 Search and Destroy is a quest in the Fallout 4 add-on Far Harbor.

This quest doesn't really offer any advantages, and results in the deaths of everyone in Acadia.

After speaking with DiMA at Acadia one has the option of beginning this quest by traveling to the Prydwen in the Commonwealth and speaking with Lancer Captain Kells. Kells says that the Brotherhood, after some time, has decided to deal with Acadia, and they have sent Knight-Captain Larsen with a small team of soldiers to help wipe out DiMA's community.

Return to Acadia and watch Larsen and his team wipe out the synths (or lend a hand).

If one has not yet completed the main Far Harbor quest line, they will now be unable to do so, and there will be no peace between the residents of Far Harbor and the Children of Atom.

The option to fast travel to Acadia will be disabled once the quest has started, and Knight-Captain Larsen and his squad will walk from their temporary post to Acadia. The player character can fast travel to another point close by, such as wind farm maintenance, and eliminate the residents of Acadia. After this, Larsen's squad may still be marching toward Acadia and the player character will be required to either wait or seek them out to turn in the quest. Once completed, fast travel to Acadia will be possible again.

Search and destroy is a military strategy that was most famously used during the Malayan Emergency and the Vietnam War. In a search and destroy mission, forces will search out the enemy, destroy them and then immediately withdraw.

If one has completed Close to Home before starting this quest Kasumi Nakano may be seen walking away from Acadia as the player character goes to begin eliminating the synths. Kasumi will be marked as one of Acadia's synths but she is impossible to kill. This can be circumvented by waiting until she has left Far Harbor to begin the attack on Acadia. [verified]

Retrieved from "https://fallout.fandom.com/wiki/Search_and_Destroy_(Far_Harbor)?oldid=3372362"
Community content is available under CC-BY-SA unless otherwise noted.