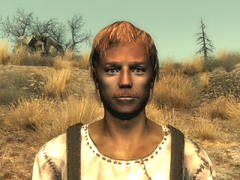 Seagrave without his helmet

“After what you did? Only because I have to.”— When the Lone Wanderer asks to do business with him after completing "Council Seat" in Bannon's favor

Seagrave Holmes is a merchant in Rivet City in 2277.

Seagrave Holmes was born in 2247. Now aged 30, he is a genius tinkerer and fixes anything he can get his hands on. He spends his days in his shop, and at night, he hangs around the Weatherly Hotel to talk to Vera Weatherly, who he is not-so-secretly in love with. Seagrave has that easy way of relating to the common folk. He fits into their social world without even thinking about it. While he is exceptionally gifted with machines, he never lords that over others.[1]

However, he previously used to work for Eulogy Jones, selling slaves to Paradise Falls. Jones has contacted Seagrave at least three times in a attempt to get him to have Rivet City purchase slaves from Paradise Falls, but Seagrave has refused to help him.[2]

He runs a general store in the marketplace called "Rivet City Supply." According to Doctor Preston's terminal, Holmes suffers from a chronic case of red-lung from all his repairs below-decks.

He is the grandson of the founding Rivet City Council member Annette Holmes.

Seagrave Holmes appears only in Fallout 3.