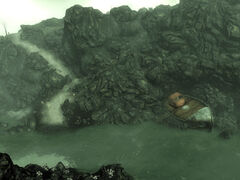 “I swear, that sort of stuff pisses me off so much. I thought joining would be all about drugs and magic, but it's just the same crap as everywhere else. Guess that's why I trailed Jackson to his stupid mystery cave!”— Nadine

The sea cave is a location in Point Lookout, entered through the wrecked seatub or the well outside the Ark & Dove cathedral. Tribal leader Jackson uses the cave to communicate with a hologram of Professor Calvert.

The cave consists of a series of passages leading to a main chamber, where Jackson communicates with Professor Calvert. The sea cave is inhabited by swamplurks, mirelurk hunters, and swamplurk queens. Additionally, a lone unnamed friendly tribal wanders the cave and will follow the Lone Wanderer around if he spots them. However, the tribal will often be killed by mirelurks before being encountered.

The sea cave appears only in the Fallout 3 add-on Point Lookout.