Increased chance to find larger amounts of ammunition in containers

Increased chance to find larger amounts of ammunition in containers

You can find more ammunition than the normal post-apocalyptic survivor. This perk will double the amount of ammunition found in random encounters.

“With the Scrounger perk, you'll find considerably more ammunition in containers than you normally would.”

You will have another chance of finding ammunition in containers. This has the same 75% chance of spawning as the original ammo leveled lists and both are not mutually exclusive, making it possible to find twice the ammunition.

This perk will not affect killed enemies or containers in locations that were visited prior to taking the perk, as these containers are filled when first encountered.

* The Rank 4 description is misleading: it gives a chance to add a free magazine or fusion core, when you fully empty the gun, not "more ammo".

This perk only affects the following ammunition types in the LLE_Perk_Scrounger* level lists. Any ammunition type not listed here is unaffected by this perk:

Scrounger is a perk in the Nuclear Winter battle royale mode. It requires 1 SPECIAL point to equip.

Whenever rolling to determine how much ammunition is found, find more.

The additional ammo found is the same as initial find, for example, if finding 10mm ammunition, this perk increases how much 10mm ammo is found. If multiple types of ammunition are found, Scrounger applies to the ammunition with the lowest rarity (GM’s choice if there is a tie).

Each time this perk is taken, the level requirement increases by 5. 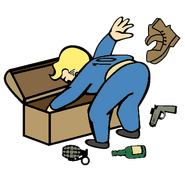