The scrapyard office is part of the Scrapyard in 2277.

The office is used by Littlehorn & Associates as the office for contract killers. The Lone Wanderer gets their business here if they have the Contract Killer perk.

At the main desk is Daniel Littlehorn, who issues the contracts. After taking the Contract Killer perk and speaking with Daniel Littlehorn one will be able to take an ear off the corpses of "good" characters and ghouls throughout the wasteland. After one takes the ear they can exchange it here for a small amount of caps and bad Karma.

The scrapyard office appears only in Fallout 3.

A painting by William Bouguereau depicting Dante and Virgil in Hell is shown prominently hanging above Daniel Littlehorn's desk. 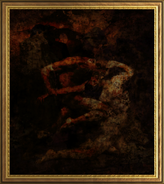 Worn painting as it appears in the office