Obtain more components when you scrap weapons and armor. 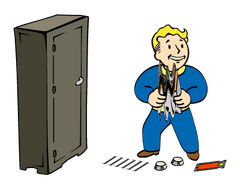 “Waste not, want not! You can salvage uncommon components like screws, aluminum, and copper when scrapping weapons and armor.”— Rank 1 description

Scrapper is a perk in Fallout 4 and Fallout 76.

If the second rank of the Scrapper is acquired, highlighted items can be seen through the screen of the Pip-Boy.[verified]

An example of the interaction between Intelligence and Scrapper follows in the table below, for scrapping a Short Assault Rifle.

Retrieved from "https://fallout.fandom.com/wiki/Scrapper_(perk)?oldid=3428748"
Community content is available under CC-BY-SA unless otherwise noted.
... more about "Scrapper (perk)"
RDF feed
Has platform
PC +, Playstation 4 +  and Xbox One +