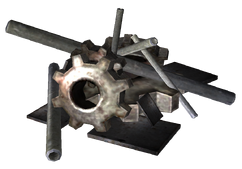 Scrap metal is a miscellaneous item in Fallout 3 and Fallout: New Vegas.

Scrap metal is a combination of generic waste metal, pieces of a metallic material or parts of any product that contains metal that is capable of being recycled from previous consumption. Piles of scrap metal can be turned into various non-player characters in exchange for rewards as part of unmarked quests.

In Fallout: New Vegas, it is also a useful alternative to a higher Repair skill to make repairs. Scrap metal is a necessary component in the crafting of the weapon repair kit. It can also be broken down into 200 units of lead, which is used in the crafting of ammunition at a reloading bench. However, lead is the easiest component of ammunition to get, as the primer, powder, and casings are all less commonplace.

All varieties of robots will usually have scrap metal in their inventory upon destruction, and scrap metal can be found commonly throughout the Capital Wasteland and Mojave Wasteland.

With the addition of the Honest Hearts add-on, player characters are given two options to craft scrap metal from commonly available items. Both recipes are available immediately upon installation of the add-on and can be accessed from any workbench so long as the player character has a Repair skill of 25 or above.

¹ The "Meals-to-Metal" recipe calls for the non-metallic variant of the butter knife, rather than the metal version.

Scrap metal was originally called "spare parts" and was designed to function just like alien epoxy (which was added to Fallout 3 with the Mothership Zeta add-on), but this idea was dropped during pre-production. Evidence of this still remains in the item's internal EditorID: "SpareParts." In The Outcast Collection Agent quest, the speech choice to give scrap metal to Casdin refers to them as "spare parts."

Retrieved from "https://fallout.fandom.com/wiki/Scrap_metal?oldid=3430966"
Community content is available under CC-BY-SA unless otherwise noted.