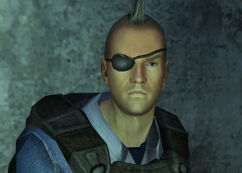 “Why? It's because I mess people up so bad they don't know what part goes where when I'm done.”

Scrambler is allegedly the toughest member of the Powder Gangers living in the NCR Correctional Facility in 2281.

What Scrambler has to say to the Courier marks him as an extremely violent and psychotic individual who has a very nonchalant attitude towards his crimes, homicide and infanticide, which he describes as "not much" when asked what he did to be sent to the NCRCF. He is also one of Eddie's bodyguards or, as he puts it, he "keeps an eye" on him.

On occasion, friendly Powder Gangers may warn the Courier that Scrambler is acting up more than usual and advise to stay away from him.

He can be found in the warden's office of the correctional facility, guarding Eddie, and never leaving Eddie's side except to chase an attacker.

Scrambler never leaves Eddie's side, unless lured away.

Retrieved from "https://fallout.fandom.com/wiki/Scrambler?oldid=3125607"
Community content is available under CC-BY-SA unless otherwise noted.