The Brotherhood of Steel scouting tower is a C.A.M.P. object that can be constructed in Fallout 76 once purchased in the Atomic Shop.

The tower is easily seen above its surroundings, roughly four stories high, with a large interior volume separated into the main hall, the upper level, and the deck. The deck has four platforms located on the corners, and railings. The whole structure is ventilated and has three unique banners on its sides. The main door is a separate object and has a unique opening animation. A maximum of three (3) towers can be placed in any single C.A.M.P. (six in a workshop).

Visually, the bunker is a scaled-down version of third generation "Flakturme" (anti-aircraft defense towers) erected by Nazi Germany in Vienna. Specifically, its shape resembles the "Leitturm" (lead tower) with the superstructure removed, especially notable due to the round platforms on the corners, which were originally housing anti-aircraft guns.[1][2]

Side shot, showing the length 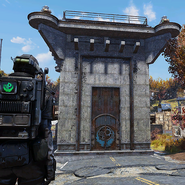 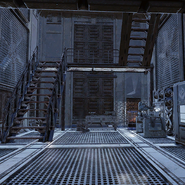 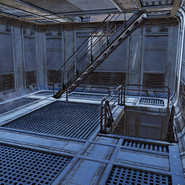 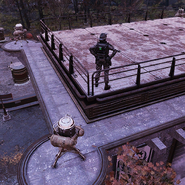