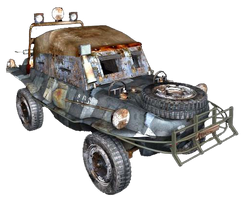 The Scouter is a drivable vehicle in Fallout Tactics.

The Scouter was built by the Brotherhood of Steel using old VW parts. It's great for quick reconnaissance work. The cockpit is almost entirely enclosed, although the armor is really only effective against light weapons. It holds two men, but has a reasonable cargo capacity. It is found by the Warrior in Jefferson, where it was left because its owners, the Brotherhood scouts, were already dead.[1]

The Scouter appears only in Fallout Tactics.

The Brotherhood of Steel's Scouter 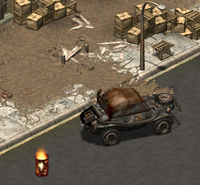 Targeted ‎Scouter
Add a photo to this gallery

Retrieved from "https://fallout.fandom.com/wiki/Scouter?oldid=2563140"
Community content is available under CC-BY-SA unless otherwise noted.