Scout the eight sectors around Gecko and return to Stark 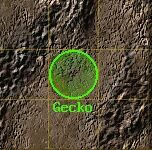 “I already got a Pip Boy. It's old... and cranky... and seems to have wires and buttons yanked out everywhere... but it works.”— Chosen One to Stark

Scout the eight sectors around Gecko and return to Stark is a quest in Fallout 2.

Once you can enter Vault City, head to the Corrections Center and talk to sergeant Stark. Mention patrols to him and he'll ask you to scout the area around Gecko since Vault City is planning to invade the town if the ghouls don't stop their nuclear reactor from leaking radiation. Quite a simple mission and a good payout for what needs to be done. Return to him afterwards for your reward.

You'll need to physically move your character around Gecko on the world map and visit each of the eight squares that surround it. If you miss one, you won't complete the quest.

Retrieved from "https://fallout.fandom.com/wiki/Scout_the_eight_sectors_around_Gecko_and_return_to_Stark?oldid=3131008"
Community content is available under CC-BY-SA unless otherwise noted.