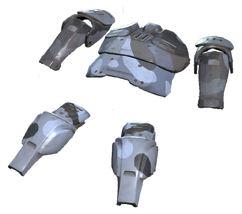 Scout armor is a piece of armor in the Fallout 76 update Nuclear Winter.

Unlike the other body armors and armor sets in Fallout 76, the scout armor found in Nuclear Winter is a single suit of armor.

It is a middle-tier armor consisting of manufactured plating painted with a four-tone camouflage pattern. It closely resembles the urban variant of the standard scout armor.

As with other Nuclear Winter armors, scout armor cannot be crafted or modified.

The suit of scout armor is only found in the Nuclear Winter battle royale mode. Being an uncommon armor, it can be found in medium and large supply crates. It is also occasionally found in random containers.

Retrieved from "https://fallout.fandom.com/wiki/Scout_armor_(Nuclear_Winter)?oldid=3229655"
Community content is available under CC-BY-SA unless otherwise noted.