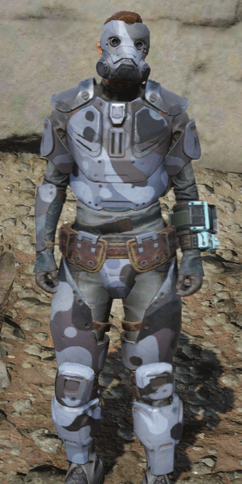 The Urban/Forest scout armor and scout mask are an armor set in Fallout 76.

The lightweight scout armor was manufactured by the Enclave following the Great War, adapted from military combat armor.[1] It was utilized by the Appalachian Enclave's covert forces until their demise in 2086.

There are two variants of the armor - forest and urban. The forest variant is painted in shades of tan and brown, while the urban variant colors uses different shades of gray. Each are considered a separate armor set by the Funky Duds and Sizzling Style legendary perks. Scout armor is only available as a sturdy armor.

Both the variants pair with respective face masks and underarmors. Both urban and forest operative underarmors and upgrades are offered by MODUS in the Whitespring Bunker. The face mask protects the lungs from toxic and radioactive particles with a filtration unit.

Scout Armor is unique in that it can't actually be crafted. Non-legendary pieces may be purchased from the MODUS production terminal in the Whitespring bunker, or acquired as a reward from Enclave quests and events.

Scout Armor is unique in that none of the material or miscellaneous modifications can actually be crafted. All modifications must be purchased as mod kits from the Armory located within the Whitespring bunker after Officer on Deck mission has been completed. The mod kits can be applied to armor pieces via a workbench.

Side view of the urban variant

Back view of the urban variant

Front view of the forest variant

Side view of the forest variant

Back view of the forest variant

Retrieved from "https://fallout.fandom.com/wiki/Scout_armor?oldid=3438694"
Community content is available under CC-BY-SA unless otherwise noted.
... more about "Scout armor"
RDF feed
Has platform
PC +, Xbox One +  and Playstation 4 +