Fallout Wiki
Register
Don't have an account?
Sign In
Advertisement
in: Brotherhood of Steel conflicts, The Pitt
English 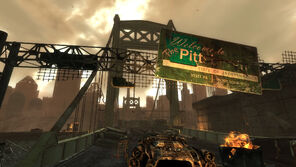 Brotherhood of Steel victory
“Now that's a story... The only reason I'm here is because of Elder Lyons. You see, I grew up in The Pitt. Don't suppose you've ever been there, huh? It's about 500 klicks to the northwest. Place is a nightmare - three irradiated rivers coming together. People there were... not well. But the Brotherhood of Steel came down on the place with a righteous hammer. They called it "The Scourge."”— Kodiak

The Scourge[3] is the term often used by the Pitt's inhabitants to refer to the battle and mop-up operations conducted by the Brotherhood of Steel in The Pitt before their arrival in Washington, D.C..

On their way to the Capital Wasteland, the Brotherhood's forces came across the ruins of Pittsburgh, Pennsylvania. A truly chaotic city, it was full of rape gangs, raiders, slavers, and many other kinds of horrors all freely terrorizing the few innocent survivors.[4]

In a single night, the Brotherhood swept through the city from their staging area at Mount Wash, and eliminated any resident who put up a fight.[5]

During the Scourge, Lyons' forces suffered only one casualty: Initiate Ishmael Ashur, who was buried in rubble during the fight and presumed dead. He survived and subsequently established firm control of the Pitt, transforming it into an industrial powerhouse, supported by Brotherhood technological know-how.[8] Having fully abandoned the Brotherhood and its teachings, Ashur recognized the inherent failure of the unsustainable, scavenger nature of the faction's ways and moved forward in his own direction.[9][10]

Residents such as Wernher recount how the area used to be much worse before the Brotherhood cleaned up the city, slaughtering half of the violent residents.[11] He explains that due to the actions of the Brotherhood, the threats were sufficiently pacified or eliminated, allowing Ashur to exert control over the city to begin with.[12]

The Scourge is mentioned in the Fallout 3 add-on The Pitt.