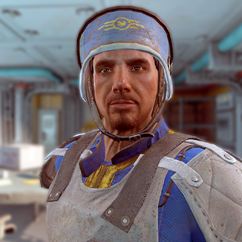 Scott Edwards is a security officer for Vault 81 in 2287.

He is a security guard for Vault 81. While he accepts that the Sole Survivor has been allowed into the vault, he makes it clear that he will not allow any hostile actions.

Edwards has some unused dialogue in which he will comment on the player character's "friend and the dog" in the first meeting, were it possible to have both Dogmeat and another companion with them.

Edwards appears only in Fallout 4.

Edwards behind his desk
Add an image to this gallery
Retrieved from "https://fallout.fandom.com/wiki/Scott_Edwards?oldid=3295374"
Community content is available under CC-BY-SA unless otherwise noted.