Scott City is a location in Fallout Tactics, which can be reached from Bunker Epsilon.

Scott City used to be a small community located in rural, far western Kansas. Around 2198 a huge industrial complex was occupied by the Calculator's robots and was used as a prison for captured humans. There, the Calculator conducted his research connected to humans. This place was of a high priority to the robots, as it gave them information about their enemies, so four jamming towers were constructed to avoid being detected by Echoboy and similar devices. When the Calculator captured General Simon Barnaky, he was brought here for further analysis.

When the robots captured Bartholomew Kerr, a merchant with extensive knowledge of the Brotherhood of Steel, the Brotherhood sent a squad led by the Warrior to infiltrate the base and rescue Kerr. They destroyed four jamming towers and rescued everybody who was in the local internment camp, including a human, Derry, a ghoul, Elaine, and a super mutant named Sebastian. The majority of the prisoners were already brutally killed in the Calculator's research of the human body or due to their attempts to escape. Even more people were lobotomized, having their brains extracted to give the Calculator access to new information. Hundreds of human corpses with their brains removed were found by Repo Squad later, all lying in a pit some miles away from Scott City.

In the building to the right from the main entrance (with the three un-targetable fuel tanks surrounded by explosive barrels), there's a hole behind the first fuel tank. Crouching is the only way to get there and the box hidden there is booby-trapped.

When the Warrior makes their way to the top of the facility, they find the lobotomized body of Simon Barnaky, whose brain has been extracted. Nearby, they find Kerr and have to kill him, as he was extensively mutilated by his robot captors.

Scott City is based on the real world location of Scott City, Kansas. 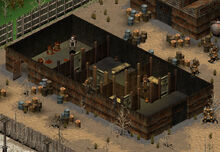