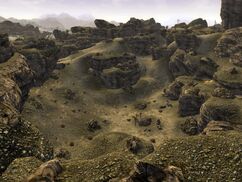 The scorpion gulch is a location in the Mojave Wasteland, located southeast of the Brotherhood of Steel bunker. As the name suggests, many bark scorpions and giant radscorpions swarm the area.

This area allows for alternative transport between Hidden Valley and the HELIOS One / Novac area. This potentially allows the player character to bypass Nipton in the south. The gulch region initially contains between two and six giant radscorpions. As the player character enters the gulch for the first time from either side, an additional four scripted waves of two bark scorpions each will appear. When these have been eliminated and the player character reaches the middle of the gulch, four more pairs will appear and attack in rapid succession.

Along the path to the gulch on the western side, there are two square holes in the walls along the way from which pairs of bark scorpions or bark scorpion hunters will spawn. Near the exit on the HELIOS One side, there is a small ramp leading up to a grave, from which the player character can dig up some random loot with a shovel. Often there can be several dead wastelanders found at the entrance, all containing minor loot. One or more standard radscorpions often lurk here.

The scorpion gulch appears only in Fallout: New Vegas.

Missing laser pistol
Add a photo to this gallery
Retrieved from "https://fallout.fandom.com/wiki/Scorpion_gulch?oldid=3401376"
Community content is available under CC-BY-SA unless otherwise noted.