The scorpion burrow is an unmarked location in the Mojave Wasteland. It is located south of Nipton Road pit stop, in the dry lake bed.

Aside from the threat of multiple giant radscorpions, a pack of night stalkers roam nearby. The two creature types normally attack each other, but if the Courier is detected, they'll attack the Courier instead.

Inside is a long corridor that leads to a large double-room cavern containing five radscorpions and a radscorpion queen. At the beginning of the corridor, a dead wastelander can be found. In the first room, there are two other dead wastelanders and in the last room, that contains the radscorpion queen, a dead Jackal gang member and a dead prospector can be found. After 144 in-game hours (not 6 days, calculated "the next day" at 12:00 A.M.), seven radscorpions will re-spawn (2 medium 50% chance, 1 medium 75% chance, 2 small 30% chance, 1 small 50% chance, 1 small 75% chance, unique random encounter).

Sometimes a wastelander can be found upon entering the burrow. He'll stay still near the entrance.

The scorpion burrow appears only in Fallout: New Vegas. 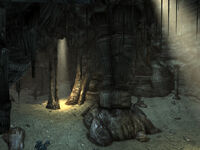 The nearby airplane, half-buried in the desert sand