Disfigured skin, Ultracite crystallization, loss of indivual thinking, hivemind connection
“...the Scorched are lethal. They are nothing less than an existential threat. If we cannot find a way to defeat them, or at the very least contain them, there's no reason to think they won't spread far and wide, transforming or destroying everything in their path.”— Anti-Scorched tactics

The Scorched Plague is a contagious infection that has resulted in the deaths of many Appalachians since the 2080s. As of 2104, the plague still exists.

In 2083, the Appalachian Enclave conducted research on mutations, running experiments on bats. When the bats were accidentally exposed to biochemical agents and radiation, they mutated, creating scorchbeasts and the Scorched Plague.[1] In 2086, Thomas Eckhart unleashed the scorchbeasts into Appalachia.[2]

Initial scorchbeast sightings were often dismissed as rumors or hallucinations. The Responders at Morgantown Airport first received word of the Scorched threat from the Brotherhood of Steel, and attempted to develop countermeasures, such as training the Fire Breathers, a group specifically trained to face the creatures.[3] The Free States operating within the Mire suffered the loss of Harpers Ferry to the scorchbeasts in 2086, and in response, developed technology such as the Scorched Detection System and the scorchbeast lures to track their movements.[4][5]

The Fire Breathers discovered that ultracite deposits become volatile when coming into contact with depleted ultracite.[6] Using this information, they and the Appalachian Brotherhood of Steel created specialized weapons such as receiver modifications and laser guns to more effectively combat those infected. In addition, the research efforts of Dr. Claire Hudson made progress on the early stages of vaccination development but were forced to abandon their work.[7] Unable to combat the spread of the plague, some groups fled the region. Ultimately the efforts of the Responders, Brotherhood of Steel, Free States, and Raiders were unsuccessful and their factions destroyed.

In 2102, Vault 76 opened and the inhabitants reentered Appalachia. Following the trail of their overseer, the Vault Dwellers discovered what became of the region's factions, and finished what the groups had started.[8] They began to manufacture vaccination for the plague after Settlers, Raiders, and other groups began to return to the region.[9] Later in the year, word of this inoculation would spread beyond Appalachia via caravans.[10] Upon arrival in Appalachia, the Brotherhood First Expeditionary Force received the inoculation as well.[11] The Vault Dwellers' efforts culminated in utilizing the region's nuclear missile silos to launch a strike against Fissure site Prime and subsequently destroying the scorchbeast queen.

The disease is spread by direct contact or droplets.[12] The Vault 76 overseer describes the creatures flying overhead to be capable of infecting those below from the sky.[8] It causes both humans and creatures to transform into Scorched.

The effects start with a series of significant physical changes in its victims. At first, the victim's skin will darken, and smell of ash.[13] Eventually, intense burning lesions begin to form.[7] After some time, the victim's skin will split open, exposing the presence of green ultracite crystals that break up from beneath their skin.[6] The plague results in subjects being controlled by a hive mind.[14][15][16]

Scorched humans are able to use melee weapons and firearms. They wear tattered civilian wear, military uniforms and faction outfits such as the varied dress of the Responders or armor of the raiders. Their vocalizations refer to themselves in the plural, with typical phrases being "we are one" or "never alone."[17]

Do not appear as Scorched variants

The Scorched Plague is similar to the real world fungus Pseudogymnoascus destructans, which destroys an animal's soft tissue, causing death during hiberation. The fungus has destroyed a large portion of the tricolored bat (Pipistrellus subflavus) population, from which scorchbeasts are possibly descended, as noted by Ella Ames.[20]

The Scorched Plague appears only in Fallout 76.

Another human victim of the plague 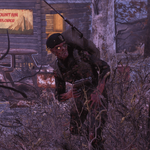 A closeup of a human victim of the plague

A yao guai infected with the plague

A deathclaw infected with the plague

An angler infected with the plague

A venomous angler infected with the plague

A bloatfly infected with the plague

A hermit crab infected with the plague

A mirelurk infected with the plague

A mirelurk king infected with the plague

A mirelurk queen infected with the plague

A mothman infected with the plague

A Grafton Monster infected with the plague

A Wendigo infected with the plague

A human victim of the plague

A military officer infected with the plague