It's a Trap
Scorched Earth
Surface to Air

Scorchbeasts, also known by the code name Sierra Bravo by the Brotherhood of Steel,[1] are creatures found in Appalachia.

The first scorchbeast was accidentally created when Enclave scientists exposed irradiated bats to biochemical experiments.[2] Despite concerns and suggestions of destroying the creatures, Secretary Eckhart ordered further study of the creature at the glassed cavern, an old AMS mining complex, while keeping the officer corps largely uninformed.[2][3] The future president wished to convince monitoring systems that they were an immediate threat, raising the alert level to DEFCON 1 and giving him access to the nuclear arsenal. Although kept in isolation, theoretically, individual beasts made it to the surface at regular intervals, as early as 2084.[4] Despite increasing opposition from the officer corps, Eckhart unleashed them upon the region in 2086, unintentionally releasing a pestilence that threatened to render the human race extinct on a continental scale.[5]

The people of the Appalachian wasteland first learned about the scorchbeasts from reports issued by the Brotherhood of Steel under Paladin Taggerdy, whom referred to the creatures under the code name "Sierra Bravo." Although they dismissed them as pure stories to give Taggerdy an excuse to commandeer ammo and supplies, they were soon proven wrong by their appearance and the plague that followed in their wake. The Scorched, mutated creatures created out of humans afflicted by the Scorched Plague, became an existential threat to the people of Appalachia.[6] The situation was made worse by their expansive breeding limited only by the available nest space in the mining tunnels below West Virginia.[1] Scorchbeasts also started nesting in Watoga.

Since then, the scorchbeasts became an established threat beneath the entirety of Appalachia. They regularly dug to the surface, destroying settlements and devouring humans, leaving large rifts in the landscape. The only way to safely close the rifts was to launch nuclear missiles from one of three automated silos scattered across Appalachia, collapsing the rifts and killing those scorchbeasts that remain. None of the factions in Appalachia managed to achieve this feat, either due to a lack of means (Responders and Free States) or ideological opposition to the use of nuclear weapons (Brotherhood of Steel). Only the Vault 76 Dwellers, entering Appalachia after the humans had been wiped out or had left the area, managed to push back the scorchbeasts and destroy them in nuclear attrition, preventing an extinction-level event.[7]

Thought to be derived from a species of pygmy bats, scorchbeast are the apex predators of Appalachia.[9] The creature has retained its ancestors' pointed ears, membranous wings, and echolocation. However, it has lost most of its fur, grown to a tremendous size, developed an extra pair of functional legs, and evolved to become the carrier of a plague which converts any infected living being into the Scorched. Despite their size, scorchbeasts possess considerable agility, and even when grounded they can leap several times their body length in one bound. Despite the behavior of their progenitors, scorchbeasts are not averse to daytime hunting and are known to cooperatively hunt in groups.[6]

Strong and aggressive, it attacks with razor-sharp teeth and claws. The beasts are potent foes, as lamented by the Responders, whose anti-scorchbeast tactics boil down to doing everything in their power to keep away from it and finding an enclosed space to fire from, as scorchbeasts are simply too big to fit into small spaces. Scorchbeasts also emit radiation and are capable of using powerful ultrasonic echolocation as a means of navigating or commanding their Scorched servants on the ground.[1][10] In addition to this, they possess the ability to emit a powerful sonic blast capable of shattering wood and metal structures from their mouths much like mirelurk kings and mothmen, but on a far larger scale. Their other nonconventional attack includes flying over an area and saturating it with an acidic, radioactive mist that permeates through cover.

Scorchbeasts, detectable by the distinct sound of their wings when they are flying overhead, are generally hostile to the player character and will summon additional Scorched enemies while fighting. They utilize three different attacks, the first being a long-range sonic attack, which is performed while flying and counts as explosive damage rather than energy damage. The interval between these attacks is at least ten seconds.[non-game 1]

The second attack is a radioactive fog, commonly referred to as crop dusting due to its dispersing from its wings much like a crop duster, and capable of traveling through roofs and walls. The scorchbeast will continue to dust an area, even if one is hidden. The scorchbeast queen uses a variant of this attack that deals poison damage, rather than the standard radiation damage. The third attack style is a sweeping attack which it utilizes while on the ground, using its wings to swing at its enemies within melee range to deliver heavy damage to them. They can also perform a lunging attack to force enemies to turn around to resume attacking it if it lunges over them and gets behind them. Their final attack consists of a shockwave attack that can not only damage enemies, but also summon Scorched to its aid to take out its would-be killers.

A diseased scorchbeast may inflict the Blight, a disease which lowers all SPECIAL stats by 1 point, randomly upon landing any attack, including their sonic blasts.

The scorchbeast heals itself over time similar to other creatures. They have also been seen to attack and infect other enemies during combat. Their attacks can be subverted by fleeing or sheltering in a small structure, or utilizing automated surface to air missile batteries.

Crippling either of a scorchbeast's wings will force it to land, after finding a suitable spot. The landing behavior can be interrupted by stagger effects applied by perks like Tank Killer or One Gun Army. Attacking the head of a scorchbeast will deal 150% damage. Almost all scorchbeast attacks create and are considered explosions, and will be mitigated by a dense torso mod or the Fireproof perk. Upon entering combat, a scorchbeast will summon a wave of Scorched minions.

The extra crispy scorchbeast was encountered in Nuclear Winter as a late-game creature that posed a high-risk, high-reward challenge. Additionally, they were the only creatures that were immune to the pyroclastic storm.

Scorchbeasts can frequently be found at these locations, usually following player characters or a succession of other targets from their spawn points:

There are one or more non-aggressive scorchbeast(s) flying around the Forest. These have a light yellow name and health bar. If attacked, their name and health bar will turn red and they will fight back but if one breaks off their attack, after a minute or two, the scorchbeast will stop its attack and return to its patrol. Locations include:

Scorchbeasts appear only in Fallout 76.

In game, the scorchbeasts are thought to have potentially evolved from local pygmy bats.[9] "Pygmy bat" is a common name for the tricolored bat (Pipistrellus subflavus), formerly known as the eastern pipstrelle, which is native to West Virginia.[11] 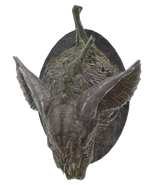