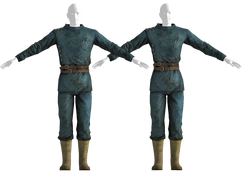 The scientist scrubs is a piece of clothing in the Fallout: New Vegas add-on Old World Blues.

The scrubs are a set of dark blue pre-War scientist scrubs that have a belt and collar. It was previously worn by scientists at Big MT; such as Dr. Calis.