“Cutting-edge science requires materials and demands sacrifice. So sacrifice some Raiders in the name of Science and take all their stuff!”

Scientific Progress is a single-stage overseer quest in Fallout Shelter.

The player's dwellers are always in need of more salvage and items of scientific interest, one way to acquire such items is brute force. The dwellers may travel to a raider base and plunder whatever they come across.

On the next floor, there is the raider boss accompanied by two more raiders. They can be spoken to but all dialogue options lead to a fight. Upon defeat, they drop a focused alien blaster; the room also contains a random legendary junk and a random rare weapon. Continuing right, past one elevator, there is another group of three raiders. The top floor consists of four groups of three raiders, one group in every room.

Scentific progress is the idea that the research and science community will continue to learn more over time, accumulating scientific knowledge. The phrase is commonly used in physics, biology, anatomy, and other studies. 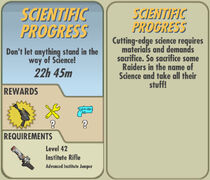