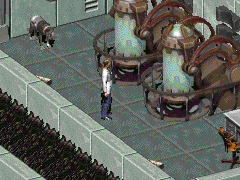 Schreber is a balding man in a lab coat.[1] Inhabiting a lab in the lower level of Navarro, Dr. Schreber is a thoroughly amoral man. Although his primary task is the analysis and experimentation upon an intelligent deathclaw captured by an Enclave patrol, he also dedicates considerable effort to extracurricular experimentation. This has been a source of friction between himself and the base's commanding officer.

In the interests of morale, the base commanding officer had Schreber's lab soundproofed, so that the "patients" the doctor was working on would not disturb the rest of the base with their screaming. Although Schreber had no way of knowing, he inadvertently set the stage for a very dangerous encounter, as nobody would be able to hear a shout for help, either.

Since his room is soundproofed, while sneaking through Navarro, the Chosen One can kill him with only K-9 noticing. Other than that, he is a flavor character only (though his death is required to acquire K-9 as a companion).

Retrieved from "https://fallout.fandom.com/wiki/Schreber?oldid=3178047"
Community content is available under CC-BY-SA unless otherwise noted.