The Scavenging station - Gold Bot is a resource-gathering C.A.M.P. object in Fallout 76, introduced in the Steel Dawn update.

When built, this station will produce a singular Gold Bot that will wander the nearby area, steadily filling the station's container by producing a random item every seven minutes and 20 seconds. The station can be set to search for "gold and other materials" or other owned Collectron types at the terminal.

These stations have a maximum storage capacity of ten pounds, meaning they must be checked and emptied regularly in order for them to continue producing items.

Crafting of the station is unlocked upon reaching rank 89 of the third season.

A Scavenging station may be built at claimed public workshops or at a player character's C.A.M.P. after being unlocked. 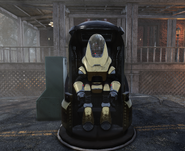