Scavengers are wastelanders searching for goods in Appalachia.

Scavengers wander Appalachia in search of items to scavenge and later sell, many attracted to the region by rumors of treasure and fortune to be gained. They can be found undertaking various activities, such as mining, chopping wood, digging for buried treasure, or even panning for gold. A few scavengers, known as scavenger traders, are open to trade.

One large group of scavengers, led by Marion Copeland, cleared out the Emmett Mountain disposal site of its former inhabitants in order to mine the irradiated ore found in the site's depths. They can be found guarding and wandering around the site, all dressed in Emmett Mountain hazmat suits.

A variety of random encounters can be found involving scavengers, including one with a scavenger looking for bobby pins, as well as a group of two scavengers looking for a place to stay. The player character can convince them to settle in either the Crater or Foundation and will gain reputation based on which settlement the scavengers are recruited to.

There is also a random encounter with a drunken scavenger asking for alcohol. He will take beer, whiskey, and rum, and may mention the Wayward in dialogue. Similarly, another scavenger who is addicted to Calmex will ask for a hit.

One may also encounter a scavenger chef who, in dialogue, will praise the merits of good cooking and offer the player character a random "gourmet" recipe. A different scavenger chef will offer finely-cooked radstag, though only if the player character agrees that it must be juicy and cooked over a flame. Otherwise, they will receive a cat meat steak.

Another random encounter focuses on a scavenger with a rusted protectron, asking for help in repairing him, as the robot is the scavenger's best friend. One scavenger can be encountered who will simply make pleasant conversation with the player character, asking how their day has been.

Scavengers appear in Fallout 76, introduced in the Wastelanders update. 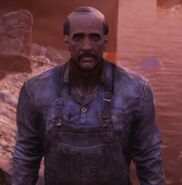 Scavenger with a shovel A scavenger fleeing from a chicken in a random encounter
Русский
Community content is available under CC-BY-SA unless otherwise noted.
Advertisement