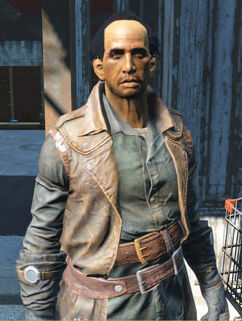 Scavengers, as the name implies, are wastelanders that make a living finding and trading valuable junk and tech in the Commonwealth in 2287.

Scavengers are wastelanders that roam the Commonwealth, looking for anything of value to salvage and sell. While they are not always openly hostile, they are much more territorial than their counterparts in the Capital Wasteland and will often engage in combat if approached too closely. Since they often turn hostile when approached, they generally cannot be spoken or traded with by the Sole Survivor. Occasionally they may appear as random encounters next to broken robots, planning to scavenge them.

Scavengers appear to mostly travel in groups of up to four and are most commonly armed with pipe guns. They are relatively weak opponents, on par with low tier raiders.

Scavengers appear only in Fallout 4.

Retrieved from "https://fallout.fandom.com/wiki/Scavenger_(Fallout_4)?oldid=3387601"
Community content is available under CC-BY-SA unless otherwise noted.